Welcome...
To Hope-Inspired Stories, for anyone who'd like to discover more about books and stories that uplift and encourage.
Several years ago, while teaching high school art, I discovered I was as thrilled as our students when they won awards or were acknowledged for their accomplishments, and to lift up other people's good works was very gratifying.
So it is my hope you are blessed with a message of grace as I was, through the words of authors featured here. Please join me in welcoming writers of fiction, nonfiction, and devotionals; of romance, mystery, historical and contemporary stories as they share their work.
⛄🎄 🌟 📖 🎀
For the first two weeks of December it is my pleasure to present an amazing series of children's books by author and agent with the Books & Such Literary  Agency, Wendy Lawton ~ Her inspiring stories will make great gifts--especially for young girls  from ages 8-12. (grades 4-6) Publisher: Moody Publishing. And please note the special giveaway at the bottom of this post... 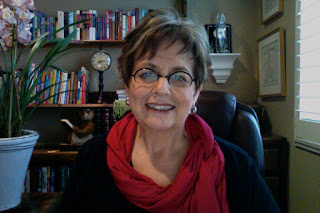 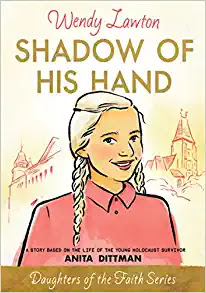 Young Anita Dittman's world crumbles as Hitler begins his rise to power in Germany,
but because she's a Christian and only half-Jewish, Anita feels sure she and her family
are from the "final solution."  She couldn't have been more wrong.

Shadow of His Hand is based on the real-life story of Anita Dittman, a Holocaust survivor. It follows her struggle against Nazi persecution and her growth in her relationship with God through the worst of times. 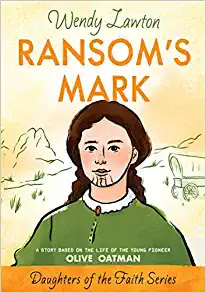 Ransom's Mark: When 13-year-old Olive Oatman's wagon train is raided by outlaw Yavapai, she and her sister are
captured. After enduring harsh treatment, they are ransomed by a band of Mohaves. Olive struggles to adjust
to her new life, but finds comfort in her faith and in an unexpected friendship.

When the time comes for her to return to the previous world she once knew, she is afraid she will never fit in. But she learns to see the Mohave design tattooed on her chin as a sign of God's love and deliverance, a mark of ransom. 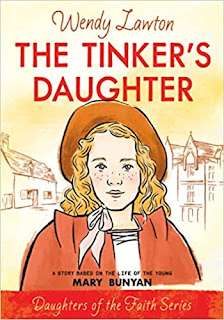 The Tinker's Daughter: John Bunyan, author of Pilgrim's Progress, only mentioned one of his children in his memoirs: Mary. Born blind in 17th-century England, she held a special place in her father's heart.

When Mr. Bunyan was arrested for unlawful preaching, young Mary travels the streets of Bedford each day, bringing soup to the prison. She resolves to prove she is independent and not hindered by her blindness. Only when she realizes she needs help does she turn to the Lord, the Source of all strength. 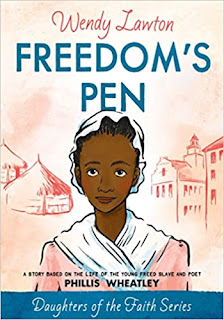 Freedom's Pen: 1761—Phillis Wheatley was a little girl of seven or eight years old when she was captured in Africa and brought to America as a slave. But she didn’t let her circumstances keep her down.
She learned to read and write in English and Latin, and showed a natural gift for poetry. By the time she was twelve, her elegy at the death of the great pastor George Whitefield brought her worldwide acclaim. Phillis became known to heads of state, including George Washington himself, speaking out for American independence and the end of slavery.She became the first African American to publish a book, and her writings would eventually win her freedom. More importantly, her poetry still proclaims Christ almost 250 years later. 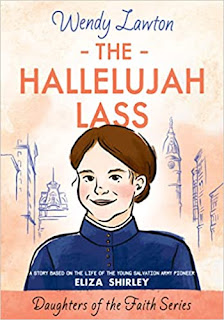 Hallelujah Lass: A Story Based on the Life of the Young Salvation Army Pioneer Eliza Shirley. As a teenager growing up in nineteenth-century England, Eliza Shirley was the picture of a proper young lady. She loved crinolines, kid-leather gloves, and her best friend, Beck. But Eliza longed for more than an ordinary, middle-class life. The Hallelujah Lass tells the story of how 16-year-old Eliza traveled from England to pioneer the work of the Salvation Army in the United States. 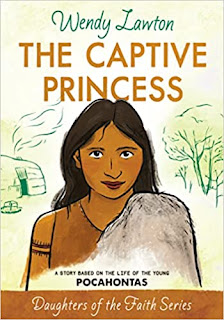 The Captive Princess: On the eastern shores of the North American wilderness lives an Algonquin princess named Pocahontas, a curious 10-year-old who loves exploring the tidewater lands of her people. One day she encounters strangers, a group of people who look different from her own. She befriends them, and when her people come into conflict with these new settlers, Pocahontas courageously attempts to save a life by offering her own. Based on the true story of Pocahontas’ early life. 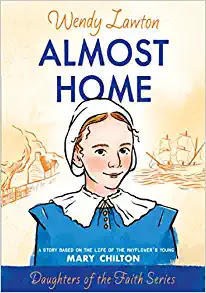 Almost Home is the story of the pilgrims’ journey to America and of God’s providence and provision.

Several of the characters in the story—Mary Chilton, Constance Hopkins, and Elizabeth Tilley—were actual passengers on the Mayflower. Mary Chilton was a young girl when she left her home in Holland and traveled to America aboard the Mayflower with her parents. The journey was filled with trials, joys, and some surprises, but when she reached the New World, she experienced a new life, new freedom, and a new home.

Wendy Lawton has taken the facts of the pilgrims’ journey to the New World, and from this information filled in personal details to create a genuine and heart-warming story. 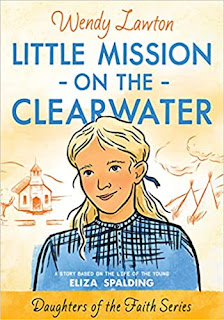 Little Mission on the Clearwater: In 1847, ten-year-old Eliza Spalding grows up with her missionary family as the first white girl to be born in the Oregon Territory. Eliza loves seeing the Nez Perce Indians come to know Jesus, and she prays the Cayuse tribe will believe as well. But when an epidemic ravages the Cayuse and tensions rise, Eliza finds herself witnessing the historical episode known as the Whitman Massacre. Told with rich detail and cultural appreciation for Native Americans, this adventure story will thrill young readers and encourage them in their faith. 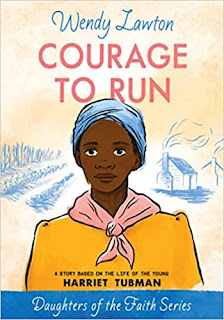 Courage to Run: Harriet Tubman was born a slave on a Maryland plantation in the 1800’s. She trusts in God, but her faith is tested at every turn. Should she obey her masters or listen to her conscience?

This story from Harriet’s childhood is a record of a young girl’s courage. Even more, it’s a story of God’s faithfulness, as He prepares Harriet for her adult calling to lead more than 300 people out of slavery through the Underground Railroad.

To further enjoy the upcoming holiday celebrations through December, leave a comment and your name will be added to drawings for a first, second, and third prize.

First prize will receive a 100.00 Amazon gift card and a signed paperback copy of one of Ms. Lawton's books of your choice. A second prize winner will receive a 50.00 gift card, and the third prize winner, a 25.00 card. (Winners will be notified on Dec. 11-'21; for U.S. addresses only).

Joyful, Joyful, We Adore Thee
Hope-Inspired Stories Photo:  The beautiful photo of Sodus Bay, N.Y. during a particularly harsh storm on Lake Ontario was taken by photographer and sister in Christ, Ginger Strom. Note the courageous lone seagull taking flight in the upper left corner of the photo.
at November 20, 2021 6 comments:
Email ThisBlogThis!Share to TwitterShare to FacebookShare to Pinterest
Older Posts Home
Subscribe to: Posts (Atom)